Battleship Potemkin is a 1925 Soviet silent film directed by Sergei Eisenstein and produced by Mosfilm. It presents a dramatized version of the mutiny that occurred in 1905 when the crew of the Russian battleship Potemkin rebelled against its officers.

Eisenstein wrote the film as revolutionary propaganda, but also used it to test his theories of montage. The revolutionary Soviet filmmakers of the Kuleshov school of filmmaking were experimenting with the effect of film editing on audiences, and Eisenstein attempted to edit the film in such a way as to produce the greatest emotional response, so that the viewer would feel sympathy for the rebellious sailors of the Battleship Potemkin and hatred for their overlords. In the manner of most propaganda, the characterization is simple, so that the audience could clearly see with whom they should sympathize.

Eisenstein's experiment was a mixed success; he "... was disappointed when Potemkin failed to attract masses of viewers", but the film was also released in a number of international venues, where audiences responded positively. In both the Soviet Union and overseas, the film shocked audiences, but not so much for its political statements as for its use of violence, which was considered graphic by the standards of the time. The film's potential to influence political thought through emotional response was noted by Nazi propaganda minister Joseph Goebbels, who called Potemkin "... a marvelous film without equal in the cinema ... anyone who had no firm political conviction could become a Bolshevik after seeing the film." He was even interested in getting Germans to make a similar film. Eisenstein did not like the idea and wrote an indignant letter to Goebbels in which he stated that National Socialistic realism did not have either truth or realism. The film was not banned in Nazi Germany, although Heinrich Himmler issued a directive prohibiting SS members from attending screenings, as he deemed the movie inappropriate for the troops. The film was eventually banned in some countries, including the United States and France for a time, as well as in its native Soviet Union. The film was banned in the United Kingdom longer than was any other film in British history. 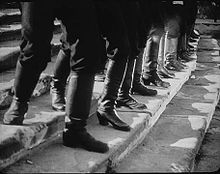 The boots of the soldiers shown marching down the "Odessa Steps"

One of the most celebrated scenes in the film is the massacre of civilians on the Odessa Steps (also known as the Primorsky or Potemkin Stairs). This sequence has been assessed as a "classic" and one of the most influential in the history of cinema. In the scene, the Tsar's soldiers in their white summer tunics march down a seemingly endless flight of steps in a rhythmic, machine-like fashion, firing volleys into a crowd. A separate detachment of mounted Cossacks charges the crowd at the bottom of the stairs. The victims include an older woman wearing pince-nez, a young boy with his mother, a student in uniform and a teenage schoolgirl. A mother pushing an infant in a baby carriage falls to the ground dying and the carriage rolls down the steps amid the fleeing crowd. 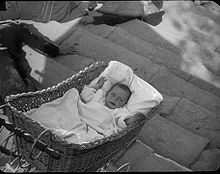 A baby in a carriage falling down the "Odessa Steps"

A wide shot of the massacre on the "Odessa Steps".

The massacre on the steps, although it did not take place in daylight or as portrayed, was based on the fact that there were widespread demonstrations in other parts of the city, sparked off by the arrival of the Potemkin in Odessa Harbour. Both The Times and the resident British Consul reported that troops fired on the crowds; deaths were reportedly in the hundreds. Roger Ebert writes, "That there was, in fact, no tsarist massacre on the Odessa Steps scarcely diminishes the power of the scene ... It is ironic that [Eisenstein] did it so well that today, the bloodshed on the Odessa steps is often referred to as if it really happened.